Are sharks going to help us reduce our CO2 emissions?

The challenge of kerosene consumption in commercial aviation

The global air fleet is currently made up of 24,000 commercial aircrafts and in 2018, it made a total of 38 million flights, carrying 4.4 billion passengers. This means that every time your heart beats, a flight takes off somewhere in the world, equating to about 72 flights a minute. Air transport accounts for 3-4% of global CO2 emissions, and with projections of current trends it could rise to 22% of global CO2 emissions by 2050. With the number of passengers doubling every 15 years(1), air transport constitutes one of the major ecological challenges of the coming decades(2). 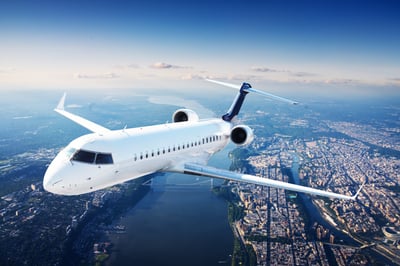 Fortunately, the airline sector is the first to commit to the planet as a whole. In fact, in 2016, the OACI, the International Civil Aviation Organization, pledged to maintain same level of emission observed in 2020 until 2035. It also set a goal in 2010 of improve the fleet's energy efficiency by 2% every year(3).

It is important that all avenues be explored, particularly the use of biofuel and the improvement of flight aerodynamics.

Many researchers are heading in this direction, drawing inspiration from nature, in particular by observing an animal whose aerodynamics are exceptional: those of the shark. When they move through water, sharks use the shape of their bodies to increase their lift and reduce their drag. These same principles are at work when planes move through the air. 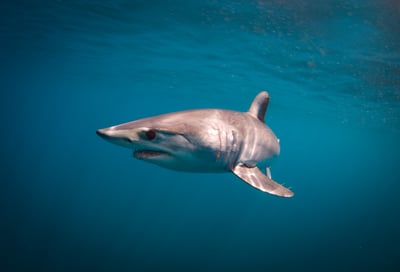 This shark inspired a well-known aircraft development, referred to as "winglets" by Boeing and "sharklets" by Airbus. This new wing shape, folded at the end, reduces the drag, and thus the consumption of kerosene, leading to an estimated increase in energy efficiency of 1 to 2%! 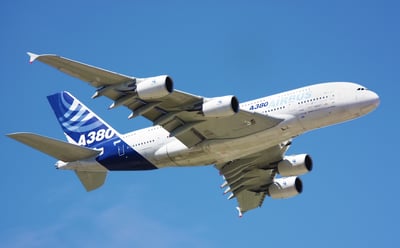 With an average speed of 50 km/h, and an estimated top speed of 70 km/h, the Mako shark, the fastest in the world, has been studied for its exceptional aerodynamics. Its skin is lined with denticles, small tooth-like scales with aerodynamic properties that the aeronautical industry wishes to replicate. Researchers at Harvard University made a scanning electron microscope image of their skin, pictured below. (4) (5) 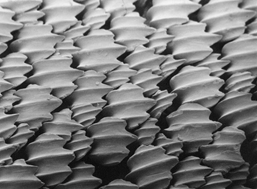 Scanning electron microscope image
of the skin of a Mako shark

By duplicating this same structure on an airplane wing, the drag could be reduced and the lift increased. In the 1990s, Airbus was already performing tests on a plane whose wings were partially covered with a sheet that imitated the texture of the shark’s skin. Despite the noticeable improvement, the technology has not been able to go beyond experimental stage, due to the lack of an adequate industrial process.

This is perhaps unsurprising, given the fact that the structure printed on the airplane’s wing would have to withstand time (at least 5 years, to be compared with the 8 years between two paintings of a plane), and extreme conditions, such as expensions and retractions of the wing corresponding to the difference in temperature between ground and flight situations. It also would cover an extremely large surface area (4000m² of paint surface on an Airbus A380) and be potentially curved, with an extremely regular pattern. All this would need to be completed within a reasonable amount of time (a few days) for the entire airplane.

What are the methods for industrializing the "shark skin" effect?

Currently, different methods are being studied to industrialize the process of printing a shark skin effect on an airplane wing, outlined below.

The first method that we’re going to discuss was developed as part of the European Clean Sky project through the partnership between the Fraunhofer Institute in Germany, the aircraft manufacturer, Airbus, and the paint manufacturer, Mankiewicz. As part of this project, Lufthansa conducted tests with a textured wing and they have proven to be very promising! This method involves printing the pattern on a layer of fresh paint with a silicone mold before it dries, the drying being done by UV. According to the tests carried out through the Fraunhofer Institute prototype, this method would make it possible to reach a speed of 1m ²/min, and thus process an airplane in 1 to 2 days. UV drying would take only a few seconds instead of hours. However, challenging aspects of industrialization remains, such as reusing the mold for several designs, and designing tools to adapt to the shape of the aircraft.(6) 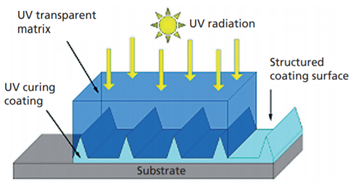 Another method implemented to study the "shark skin" effect is use of additive manufacturing (3D printing) to print the pattern directly on the wing of the aircraft. Harvard University made 20 configurations of the transparent photopolymer pattern through this method and then wind-tunnel tested them. The results exceeded the initial expectations; not only was there a decrease in the expected drag, but there was an increase in lift! The lift-to-drag ratio was improved by 323%, paving the way for significant reductions in kerosene consumption. Nevertheless, this process remains experimental at this stage, as current additive manufacturing techniques do not allow for yields in line with the end goal.(4) 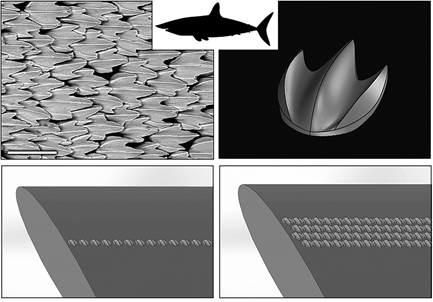 A very different method is currently being developed by the German companies 4Jet, specialists in laser machining, and Mankiewicz, aircraft paint specialists (8) (9). The process involves partially machining the paint directly on the aircraft. By interfering on the wing’s surface, the paint will be alternately digged or not of a few microns, creating a pattern similar to that found on Mako sharks. This method developed by 4Jet would be 500 times faster than similar, previously developed methods, enabling the creation of 15km of linear texture, or 1m ² of surface, in under a minute. This project is very promising would allow an estimated 1% reduction in fuel consumption! 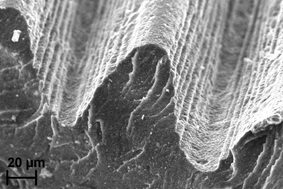 The final noteworthy method is producing directly textured composite parts developed by FRIMO. This approach is only applicable to automobiles, as aircraft materials are currently incompatible with the methods being used. Nevertheless, the end goal is the same: to improve aerodynamics by reducing lift. A partnership between FRIMO, BMW, 3D-Core, Eschmann-Texture, ISL and Dstyle has enabled the production of parts for a textured BMW Z4. The parts are made of composite molded Vitrox®. Tests have been carried out in independent tunnels and have demonstrated that it is possible to produce measureable decreases in vehicle drag!(10) (11) 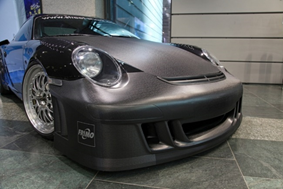 And where is Cailabs in all of this?

Cailabs is participating in the European CUSTODIAN project (12), which is aimed at improving the yield of additive manufacturing processes, relevant to the method developed by Harvard.

Nevertheless, Cailabs is primarily interested in optimizing painting processes by interferences. We have actually noted the development of a laser paint stripping methodology on an industrial scale, the first of its kind – which is also a great ecological step as it limits the use of relatively dirty chemical processes.(13) 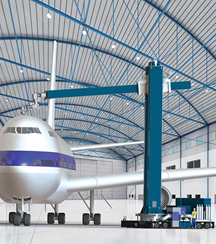 Developed by LR Systems, this process uses a very high-power CO2 laser (20 to 30kW), which appears to be well-adapted for paint removal, the basic principle of the interference process. These lasers have circularly symmetric Gaussian profiles, which isn’t ideal for achieving extremely uniform texturing by scanning. The square “top-hat” formatting allows not only for a more regular pattern to be achieved but also scanning without overlap all the while creating an identical pattern over the surface of the aircraft. 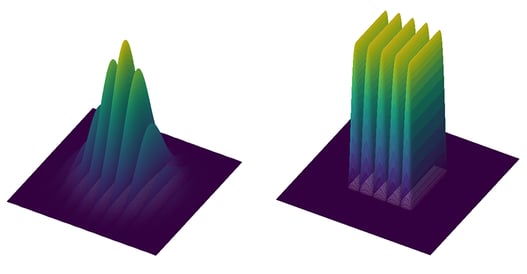 It appears that this type of very high-power shaping is only possible through CANUNDA-HP technology, all reflective, allowing optimum cooling of the optics! 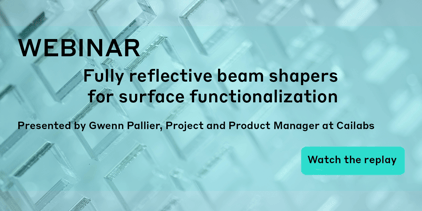 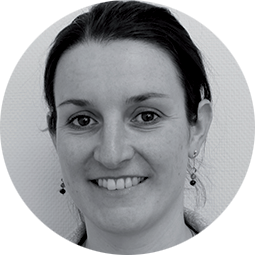 Product Line Manager for material processing applications, Gwenn Pallier holds a Masters’s degree in optical engineering from the Institute of Optics (Paris, France). As a project and product line manager at Cailabs, she brings her expertise to the development and commercialization of innovative optical solutions, that optimize the quality and performance of laser-based material processes.