Satellite-to-ground laser communications: a step from experimentation to commercialization

Optics will be part of space communications in the near future, since radio frequency will not be able to follow the growing needs, as shown in a previous article: "Lighting up the future of satellite communications".

The intrinsic potential of free space optics in terms of throughput and security is very attractive, but the operational implementation of this technology relies on a very important point: the reception infrastructure on ground.

Indeed, a 100x higher throughput potential is useless if not correctly received on earth. Of course, some experimentations already took place to qualify laser links between space and earth.

A bit of history

Seeing the potential of light as a vector of information in fibered or free space networks on earth, transmitting data from space down to earth through a laser has been explored since the beginning of the nineties. In 1995, the first successful downlink transmission has been emitted by the JAXA’s (Japan Aerospace Exploration Agency) GEO satellite ETS-VI, and received on earth in Tokyo at the NICT’s (National Institute of Information and Communications Technology) Optical Ground Station (OGS).

The link achieved a 1Mbit/s communication. Indeed, the throughput was relatively reduced compared to the established technology, radiofrequency, or to the potential of free space optics, but nevertheless demonstrated the concept and feasibility of satellite to ground laser communication. 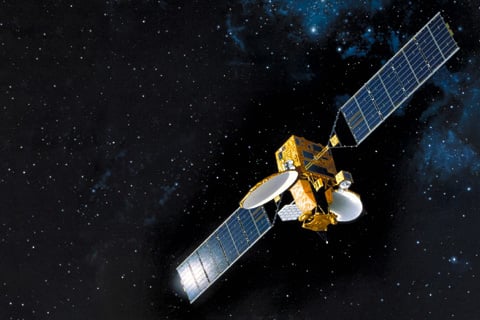 In the same way the space industry is reshaped, the experimentations on optical links from space to earth have changed. In this dynamic, the number of experimentations linking low earth orbits multiplies. For example, Sony Computer Science Laboratories (CSL) and Kongsberg Satellite Services (KSAT) recently demonstrated an optical downlink emitted from the International Space Station (ISS) and received at the KSAT OGS in Greece. The link is emitted from the ISS thanks to a small optical communication terminal called SOLISS and co-developed by Sony CSL and JAXA.

Another impact of the new space era, the optical link is now emitted from a small satellite, like in the PIXL-1 mission. This mission is a technology demonstrator aiming at test an optical communication payload co-developed by the German Aerospace Center (DLR) and TESAT to be integrated into a 3U CubeSat. The functional objective of the mission is to take and transfer high resolution pictures from space to earth. For that, the satellite can point to the transportable optical ground station (TOGS) from DLR near Oberpfaffenhofen, Germany, and will be associated to the Nucleus Network. 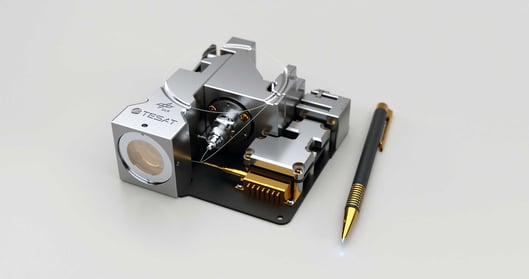 Technical challenges are linked to the nature of these missions. First, a LEO satellite, which is, by definition, not geostationary, crosses the sky at a high velocity, and is visible from a fixed ground station about tens of minutes maximum. This adds complexity compared to a GEO mission, because the ground station and the satellite have to follow and point each other dynamically with a high accuracy.

Moreover, in this case of a satellite to ground communication, the optical link is perturbated by atmospheric turbulences, that can degrade the signal quality. To counter this phenomenon, several technical tools have to be set. But all these experimentations show that technological barriers are being removed, thanks to advances of the level of technological maturity and a certain flexibility offered by the new space environment.

Why laser communications are not still the norm for satellite to ground links?

Even with the attractiveness of an almost unlimited potential in terms of throughput and data exchange capacity, and the proliferation of missions, as shown in the previous part, laser communications are still not established as a major standard for satellite to ground links. In facts, radiofrequency remains widely used for operational links while lasers stick to experimental missions.

As many new technologies, market penetration of laser communications in the space industry is directed by the ratio between market needs and risks of implementation for the users. The latter has at least two components, a technological risk of betting on a less mature tool, which has been used for a shorter time compared to the classic solution, and a financial risk of implementation of the technology that have to be carried by the user.

In the case of satellite to ground optical links, the two factors of this ratio are evolving favourably for the penetration of this technology on the market. In one hand, the overall market need for spatial communication is increasing, helped by the new space context, as seen in the first blog article of the serie: New space: the reshaping of a whole industry. In this way, it has also been seen that radiofrequency will not be able to supply the growing needs, which mechanically increases the demand of the market for spatial laser communication.

In the other hand, technological risks have been widely reduced thanks to the battery of experimentations, a few ones being presented in this article, making the lasercom technology reliable at a very short term. Intrinsic risks, such as cloud coverage (lasers cannot transmit through clouds) can be easily managed by diversifying the number of stations over a geographical zone.

For example, to cover Europe, a network of 10-12 interconnected stations is sufficient to provide a reliable link from space. So, the risk linked to the important financial investment of implementing a new network of Optical Ground Stations is mitigated by managed risks on technological point of view and increasing demand.

Depending on the point of view, this financial risk can be seen as an opportunity, with an entire ground segment to develop, there is a spot to grab for companies developing products and services on this market.

For 3 decades, satellite to ground optical communications have widely developed on the technological point of view. Many experimentations, on top of these presented in this article, took place, showing the feasibility and potential of free space optics in this field. The impact of the market reshaping, the new space era, is of course felt, changing the technological needs, with more LEO satellites and smaller payloads.

It is also facilitating the experimentation of laser communications, with an easier and cheaper access to space, allowing more experimentations, and the collaboration between public and private entities. But it still has not became the major technology for satellite to ground communications. Nonetheless, the market demand will mechanically increase, because of the future incapacity of radiofrequency the supply the growing needs, while diverse risks of implementation are mitigated.

These two evolutions in parallel are strong signals favouring the penetration of this technology in the market. Indeed, it identifies the optical communications ground segment as a strong opportunity place, with an entire network that will have to develop in the newt years.

Laser Communication
Share
Previous post
Lighting up the future of satellite communications
Next post
Switching to an all-optical network – The best ROI when upgrading your infrastructure?