What is an OAM wave and what are its properties?

OAMs are currently the subject of numerous research projects. Highly praised by their advocates, “on paper” they offer the power to multiply the bandwidth of our modern communication networks. Their very particular form would allow them to encode information in a new format, or even a new quantum mode of information propagation. But what is an OAM wave? What property gives it these incredible characteristics? We will do our best to answer these questions in this article, which exclusively addresses the problem of OAM in the optical domain.

Representing an OAM in optics

First of all, in order to be able to physically represent an OAM wave in optics, we have to go back to the basics of what light is. The goal is not to precisely describe all these properties and their behavior. However, we’ll try to summarize the characteristics we are interested in as succinctly as possible.

Light can be described as an electromagnetic wave consisting of zero mass particles (photons). This is called wave-particle duality. The wave-like pattern of light causes its electric field E to oscillate perpendicularly to its direction.

The polarization of light refers to the direction of the electric (or magnetic) field as it travels along a ray of light over time. For example, it can be linear, circular or even elliptical. When this field is circularly polarized, the electric field vector E can rotate in the plane perpendicular to this ray in two directions: clockwise and counterclockwise. 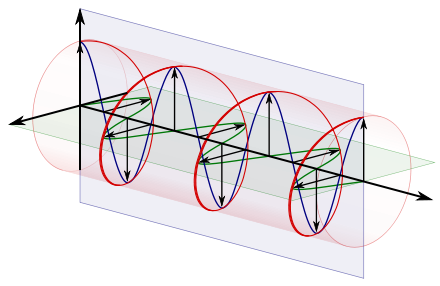 To understand what orbital angular momentum (OAM) is, keep the propagation of a circularly polarized wave in mind.

What is Orbital Angular Momentum?

In quantum optics, we can see this motion of electric charge as the kinetic momentum of the light-wave photons at a given frequency. This is called spin or angular momentum. It is the intrinsic rotational movement that a photon can have. (Light Spin Angular Momentum – SAM). The spin vector corresponds to the two states of circular polarization.

However, there is another way for an electromagnetic wave to transport kinetic momentum: orbital angular momentum. This corresponds to the rotation of the photon around an axis external to itself.

The most well-known analogy is that of the earth orbiting the sun. The Earth’s rotational motion can be called its spin, like a photon, while the Earth’s revolutionary motion around the Sun gives it an orbital angular momentum.

An additional component appears when writing a solution to the propagation equation. This is a variant term e-jl𝜽 with l being the topological charge of the wave or azimuthal order or index, or even the roll index, and 𝜽 the roll angle.

In the circular polarization example above, all photons in the beam rotate about a single axis which becomes the beam axis. The orbital angular momentum can be described as a helical wavefront whose helix number l (or topological charge) has no limit. This is referred to as an OAM wave. (OAM – Orbital Angular Momentum).(1)

Properties of an OAM

An OAM therefore has a quantified magnitude, which is its helix number. Because of the structure of the OAM, it can be used for encoding information by considering each value of the helix number l as an information bit. 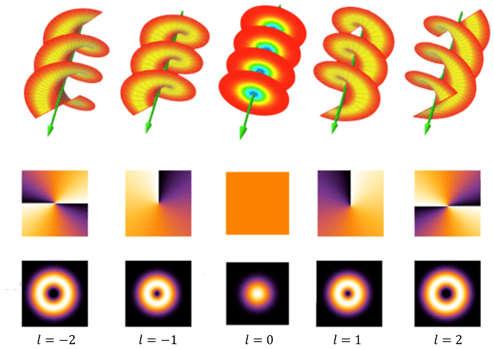 A number of ongoing projects have focused on information exchange by generating these OAM “twisted waves” or “vortex beams” in optical fibers or in the atmosphere. OAM waves could provide an additional magnitude to route more capacity through future fiber optic telecommunications networks(2). In particular, we could explore the possibility of spatial multiplexing using OAM waves (SDM – Space Division Multiplexing) in ring core fibers(3).

In an upcoming article, you’ll discover some of the possible techniques to generate these OAM waves. One of these solutions is Cailabs’ PROTEUS spatial multiplexer, the only commercial solution that offers spatial multiplexing of OAM modes.

Watch the replay of our webinar on OAM generation 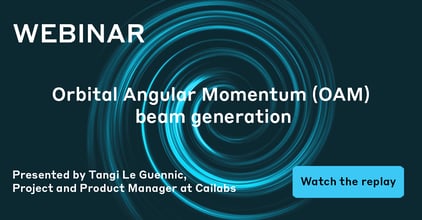